Just like their name suggests, pests can be incredibly annoying. From your garden to your bed to your clothing, they can crop up here, there and everywhere and – worst of all – they’re very difficult to get rid of.

While there may be a number of, how do I put this, ‘less humane’ methods to deal with pests, not everyone feels comfortable using them, instead favouring kinder approaches capable of preventing the issue at hand.

As the years have passed by and technology has become gradually more and more advanced, techniques used to control pest problems have become more honed as well.

In this article, we take a look at some of the more modern-day approaches towards pest control – from farming using lasers to eradicating insects using sound waves. Let’s get started.

OK, so these may have been around for a few years now but they’re still a highly effective method of eradicating pests.

In a similar way to a plug-in air freshener, which emits a nice smell after being plugged in, pest repellent plugs have been designed to emit ultrasonic sound waves as soon as they’re switched on at the wall.

These incredibly high frequency sound waves can’t be heard by humans or small animals like dogs or cats, thankfully. They are specifically designed to target pest insects like flies, moths, cockroaches and even rodents, and can cover areas of up to 1200 square feet.

However, that’s not all – the sound waves are entirely harmless to the pests as well, simply designed to drive them away without eradicating them completely.

In other words, the plugs are a humane pest repellent which cover a large area and are relatively inexpensive to install. Talk about a win-win.

Whether it be seagulls at the beach, pigeons in the city or starlings in the early hours of the morning, having a pest bird problem can be a right pain.

However, unlike other types of pest, there are laws which protect certain bird species from being removed inhumanely. Therefore, if you’re currently struggling with a bird-related issue, you’ll have to think about how to prevent the problem, rather than how to eradicate the pests completely.

One of the most effective, yet humane, ways of dealing with pest birds comes through the simple addition of bird spikes to your property. Birds aren’t stupid – if they see a load of spikes sticking out of a roof, they’re not going to impale themselves in order to carry on nesting.

They’re simply going to move on to the next available property or building that takes their fancy. 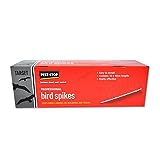 If you are one of those people who has an absolute hatred of spiders and all other eight-legged arachnids, then this is the solution for you.

Now, instead of jumping on the nearest friend, chair or table when you next spot a spider, moth or crane fly, you can calmly head towards the utility cupboard and grab your very own spider catcher device.

These devices are a humane way of catching spiders and other insects from a distance so that you can dispose of them quickly and easily outside.

The soft bristles trap the insect in question without causing any harm to them.

And, best of all, the long handle means you never actually come into contact with them either, meaning you avoid the squeamishness of catching the insect using a glass and piece of paper.

While this idea may sound like something more akin to Star Wars than pest control, certain farmers have recently seen the benefit of using lasers (yes, seriously) to protect their crops from birds and various other wildlife.

The unpredictable pattern of the green lasers that shoot out act as a deterrent for pests, effectively scaring them off before they can cause any harm.

Again, since these lasers aren’t directly targeting the pests, the solution is relatively humane – removing the pest problem without needing to eradicate them completely.

If only the lasers could somehow be fitted into the eyes of a scarecrow; now that would be a truly unique pest control solution!

Which Is Best For Sound Insulation: Acoustic Glass vs Triple Glazing?

How To Stop Dogs Fouling Outside Your House