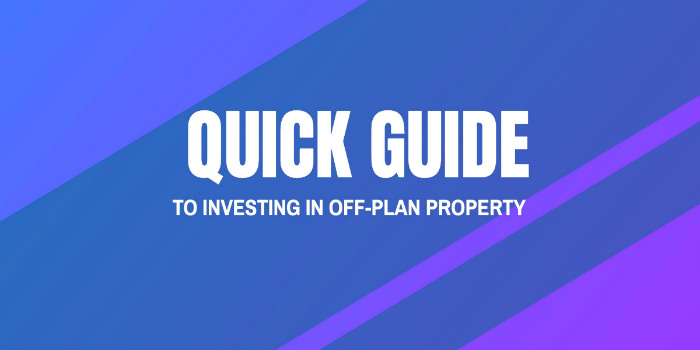 Investors purchasing off-plan property should be a win for all concerned.

Developers get access to funds, investors get quality property at a discounted price and residential buyers get an increase in housing stock which has been, if not only made possible by investment funds, then at least strongly facilitated by them.

Many times, this is exactly what happens, however, sadly, not always. Off-plan buyers do, therefore, need to proceed with some degree of caution and pay attention to the points raised in this guide.

Pick your developer before your property

As a residential buyer, your lifestyle will determine your preferred location for a home. As an investor, however, you can look at any desirable location.

This means that any of their developments is probably going to be a good option, so an investor’s choice will typically be determined by other criteria such as price and how well a property will fit into an existing portfolio (or the portfolio an investor would like to create).

Less-reputable developers may propose builds in areas where there is available space, but not necessarily the right level of market demand for whatever they propose and hence off-plan investors may find returns disappointing or even find themselves losing money, at least in the short term.

Undertake thorough research on your developer

This is really an extension of the first point, but it is so important it is worth emphasizing on its own.

Post-2008, there were well-reported instances of developers going bankrupt, taking their clients funds with them.

That currently seems to be less of an issue, however, there is, sadly, still very definitely an issue with certain developers basically building properties at the lowest possible cost, with little or no regard for quality.

Such properties may sell or let in the most buoyant of markets (although even then they may not achieve the returns investors wanted), but where buyers and tenants have more choice, investors may find themselves struggling to move them on.

Restrictive leases can be an issue

Another potential issue, which is becoming increasingly contentious, is the issue of onerous and restrictive leases. Again, properties with such leases could be very hard to move on.

The way to guard against winding up with such a property on your hands is to do very thorough research on the developer behind it.

Ideally, you want to see a company with a long track record of successful developments, completed to time (unless there is an extremely good reason for the delay), and to the satisfaction of the purchasers, be they investors or residential buyers.

Of course, this does create something of a “chicken and egg” situation for new developers, which may seem unfair and for this reason, some property investors may be willing to look at developments from younger development companies.

It would, however, probably be best to have some experience in the area before going down this path, since it basically involves asking the right questions to the right people to determine who is behind the company and what sort of track record they have.

Speaking of asking questions, a reputable property developer will be only too happy to answer any questions you may have and will do so clearly and concisely without trying to baffle you with jargon.

A note on leases: There has been a growing trend for new-build properties, especially in city centres, to come with a range of “add-on”, convenience facilities, such as launderettes, gyms and cafes.

These facilities obviously require upkeep and hence the service charges on such properties are higher than you would expect for an equivalent property without such on-site facilities.

Whether or not such charges are justified is a matter of judgement, but it is a matter of fact that landlords will only be able to charge them to tenants if they are specifically included in the rent, so it is important to keep them in mind when setting rents.

Our Favourite Books On Property Investing:

Look at “hard” documents rather than “soft” ones

In this context, “hard” documents can be seen as documents with legal standing, whereas “soft” documents are essentially promotional materials. When taking meaningful decisions, it’s important to look only at the former; in fact, you may want to avoid the latter completely (or at least as far as possible).

In particular, it is crucial that you look at the actual, formal, specifications of the property rather than at the images in the sales brochures.

If necessary, draw them out yourself to scale and then go online to a mainstream furniture shop and get an idea of what will actually fit into the space.

Be aware that “artist’s images” and such like are exactly that, they can be manipulated to give the impression of greater space.

Even “real-world” show homes can be and frequently are staged to look as spacious as possible, for example, they may use decorations which trick the eye (for example stripes) and smaller-scale furniture.

Again, generally speaking, reputable developers will ensure that each room has enough space for its intended purpose, but even the best developers still exist to sell properties and as such will present them to their best advantage and some can get a bit over-enthusiastic about this.

Communicate effectively with your developer

One of the great benefits of buying off-plan property is that you usually have the opportunity to have the property customized to your specifications.

Again, reputable developers will generally have a very clear process for communicating about these customizations, however, this process does depend on investors taking (or making) the time to read and understand documentation.

Again, if you have any doubts, it’s important to ask. Even the most reputable developers can create documentation which can be a bit unclear and if you contact them about it, they will be happy to clarify for you, in writing if necessary.

Request agreement that “snagging” will be resolved before completion

Having said that, developers are only human and once the purchase is completed, any requests made by you will simply be scheduled in with the other work they have to do, although, again, reputable developers will be reasonable about this and will prioritize anything urgent.

If, however, you can put together your snagging list before completion, the developer will need to fix any issues raised before they get the final payment.

As an added bonus, everything will be sorted before your tenants move in, thus removing any inconvenience to you.

What Are Property Management Companies?

Renting To Family Members: The Law In The UK

How To Get Out Of A Bad Property Investment