Is it illegal to sell a house with asbestos in the UK? It’s a good question to ask if you’re considering moving home.

Asbestos was used in the construction industry for several years, but according to several surveys, most homeowners would be unable to identify it.

That means many of us could be living with asbestos without realising it.

That’s not necessarily an issue since it only becomes dangerous when disturbed, but it still means that knowing a little about the material could serve you well.

So let’s take a closer look at asbestos (don’t worry – no masks required!)…

According to the dictionary, asbestos can be defined as:

a highly heat-resistant fibrous silicate mineral that can be woven into fabrics, and is used in brake linings and in fire-resistant and insulating materials.

So, it’s a naturally occurring substance that has a wide range of potential uses. In many ways, it’s a marvelous natural material that’s great for insulating, fireproofing, and soundproofing.

But, in one way, it’s absolutely deadly.

Why Is Asbestos Dangerous?

When left alone, asbestos is actually a relatively safe product. The issue comes when it is disturbed.

That’s because it’s made up of fibrous crystals, with each visible fibre composed of millions of microscopic “fibrils” that can be released by abrasion and other processes.

Inhaling these “fibril” has now been linked to a number of diseases including lung cancer and mesothelioma. It has also spawned its own disease, asbestosis, a long-term inflammation and scarring of the lungs caused by inhaling asbestos.

As the symptoms for such diseases often only show several years after exposure, it took many years before the effects were realised.

That’s why you’ll now find asbestos in a surprising number of places despite its obvious danger.

Since the main issue with the material is when it’s fibres and disturbed and inhaled, it requires special attention if found during any form of removal or renovation project.

What Is Asbestos Used For In Homes?

Asbestos can lie in even the least expected areas of a house. For example, take a look up. If you have a textured Artex ceiling you could be staring straight at asbestos.

That’s because right up until as recently as the year 2000, Artex contained asbestos in order to strengthen it.

Other potential uses in the home include in drainpipes, insulation, floor tiles, corrugated roofing, cold water tanks, and more.

In fact, it’s estimated that around 50% of homes in the UK contain some form of asbestos.

Remember though, providing it is left undisturbed, it is highly unlikely to cause any ill-health effects.

It’s only if you intend on moving, sanding, or drilling it that it becomes a possible health risk.

How To Identify Asbestos

Asbestos is actually quite difficult to identify, hence why most people will be surprised to learn their home has it.

There are also some materials that are more likely to contain asbestos than others.

Keep in mind that it is often coated or covered by another substance (such as an Artex ceiling that’s been painted).

Surveyors are trained to look for signs of possible asbestos use and so a good option is often to find a chartered surveyor and have a survey conducted on the property.

Remember though, while there are signs to look for, the only true way of detecting if a substance is made of it is to conduct a laboratory test. 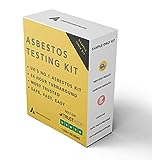 Is Your Garage Roof Asbestos?

Whilst the use of asbestos in the UK was peaking across the 1960s and 1970s, so too was the building of new homes in urban areas. To meet the expectations that families have on new homes, outbuilding and garages were built as standard to match the newly built property.

With the material being so low-cost to mine, source and manufacture, it is no surprise that up to 70% of these new builds came with asbestos garage roofs.

Fast-forward several decades, and now these old, degrading garage roofs are starting to show their age. After many years of use, asbestos panels will crack, chip and decay.

Since it’s is at its most dangerous when disturbed, its important to identify it before your garage roof panels fall apart.

Fortunately, there are a few tell-tale signs that could signal your garage roof is asbestos:

Imprints on the Underside of the Roof Panels

Many manufacturers imprinted the letters ‘AC’ onto the underside of the roof panels. If you find ‘AC’ on yours, it is very likely an asbestos panel.

Since asbestos is a cement-based product, when exposed to sunlight over the years it may experience the growth of fungi on top of the roof.

Asbestos after decades of weather exposure will crack and erode. Keep an eye out for large cracks in the panels as this is a sign of asbestos panels on its way out. In winter these cracks will swell and possibly lead to water ingress. If this happens, it may be time to look at replacing your garage roof.

As always, if you suspect you have it, you should get an expert to survey it and confirm it before doing any work with it yourself.

When Was Asbestos Used In The UK?

Even during the 1980’s it was still relatively popular, although by then the health concerns were starting to be recognised.

By the time the first UK asbestos laws were introduced in 1985, usage was already in decline.

However, it wasn’t completely banned until 1999, five years ahead of an EU deadline. Therefore, it was used in the UK for a surprisingly long amount of time.

Is Asbestos Still Being Used Today?

The short answer is no, at least not legally!

It is now illegal to use asbestos in the construction of buildings in the UK.

However, it is not illegal for properties to contain asbestos that was installed prior to the introduction of the 1999 regulations.

When Was Asbestos Banned In The UK?

Compared to many other countries, the UK Government were slow to react to the discovery that it could cause serious health issues.

However, the first UK asbestos laws were passed in 1985, banning the import and use of two types of asbestos (blue and brown).

By 1992, the law was updated to also include the use of some types of white asbestos which had previously been considered lower risk.

During the 1990’s several other related laws were passed, including the requirement for removal to be carried out by licensed professionals.

As recently as 2012, more additions were made to asbestos regulations to further improve safety.

So, Is It Illegal To Sell A House With Asbestos In The UK?

In short, no it’s not illegal, although if you know that it is present in the property, you must disclose this to any potential buyers.

Providing that the material containing asbestos appears to be in good condition, this is all you are legally obliged to do to comply with the asbestos disclosure requirements when selling a property.

However, if the material is damaged and likely to cause a threat to health, the situation when selling a property with asbestos becomes more unclear.

In such cases, you may be best employing a specialist removal firm in order to remedy the situation.

However, the costs of removal can be high so be prepared to foot a large bill!

What About Buying A Property With Asbestos?

If you are buying a property with asbestos you’ll need to take into account any remedial work you may have to carry out.

If you are not sure whether it’s an issue, your first port of call should be to have a survey carried out by a qualified chartered surveyor. That will help you decide if it is a concern in the property.

If you have identified that it exists on the property, you’ll need to consider whether it needs removing or not.

It will need removing if it is damaged or if you intend on renovating the area where it has been found.

If you need or want to remove it, you should obtain a quote from a qualified asbestos removal firm prior to exchanging contracts on the property.

Removal can cost several thousands of pounds even for relatively small amounts.

Once you have a quote, you can use this to potentially negotiate a lower buying price if you did not know about the asbestos when you made your offer.

Can You Remove Asbestos Yourself In The UK?

Yes, you can legally remove asbestos yourself if you live in the UK – but that doesn’t mean you should!

Although there are no laws against it, only firms removing it as a paid service need to be licensed.

Homeowners who wish to remove asbestos from their home and dispose of it themselves are entitled to do so.

You will, however, need to check the asbestos disposal requirements in your local area on the Gov website.

While we do not recommend removing it yourself due to the potentially fatal health risks, be sure to wear the correct protective clothing if you decide to tackle it alone. That includes breathing apparatus and clothing. 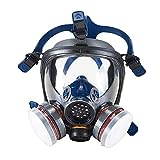 So, hopefully, that answers the question of whether it is illegal to sell a house with asbestos in the UK and has also given you plenty to think about regarding the substance!

Does An EV Charger Add Value To Your House?