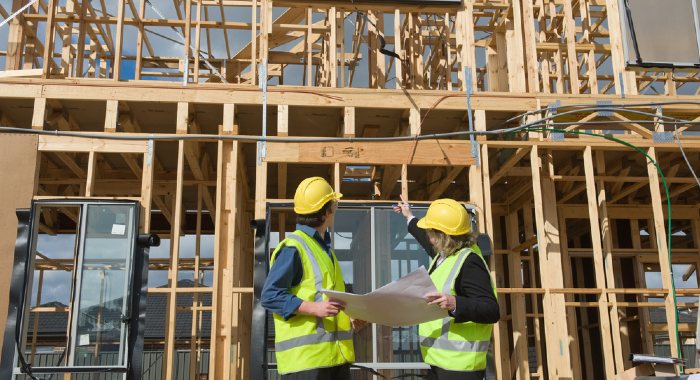 The news comes hot on the heels of the PM’s recent pledge to ‘build, build, build’ to lift the economy out of the recession caused by the pandemic. Robert Jenrick emphasised that the intention is to speed up building and cut red tape, but not lower standards.

Writing in the Sunday Telegraph last weekend, Mr Jenrick explained that under the new rules, land will be zoned in one of three categories for growth, renewal or protection. Developments on land designated for ‘renewal’ will be given ‘permission in principle’

However, James Jamieson, chair of the Local Government Association categorically rejects the notion that the planning system is a barrier to house building. Nine in ten planning applications, he says, are approved by councils, yet more than one million homes granted planning permission in the last decade have not been built so far.

Furthermore, the Government’s own independent report last week warned of the potentially inferior quality of homes not delivered through the planning system. Mr Jamieson has urged the Government to take notice of the warnings and not weaken the planning process.

The homeless charity Shelter has also warned against any reforms that could result in poor quality housing and pointed out that 280,000 homes which received permission in England between 2011 and 2016 were never built.

Automatic permission to focus on quality and design

In defence of the changes, Mr Jenrick stated that England’s ‘outdated and cumbersome’ planning system had created a generational divide between homeowners and renters. He claimed that under the existing system, it takes on average five years for a ‘standard housing development’ to pass through the planning process.

Nevertheless, BBC Reality Check found that many developers who obtain planning permission do not build straightaway. In 2017-18, 382,997 applications were granted which would have been sufficient to beat the Government target of 300,000 new homes per year.

Mr Jenrick intends homes, hospitals, schools, shops and offices to be given automatic permission on land designated for growth. Although he did not specify the criteria for the designation of land under the new proposals, areas of outstanding natural beauty and the green belt will be protected.

The housing minister added that the reforms will focus on quality and design, drawing on the principles used to build towns and cities that have become heritage areas, such as the city of Bath and the model village of Bournville. But he did not say how quality will be enforced.

The proposals follow on from the extension of permitted development rights (PDR) which allow the demolition of vacant buildings to be replaced by housing without a full planning application. Under the same system, householders will be able to add two-storey extensions to their homes.

Yet critics such as the president of the Royal Institute of British Architects (RIBA), Alan Jones, have called on the Government to reconsider the concept of automatic permission, saying that this ‘planning revolution’ will not deliver a broad mix of affordable, age-friendly and sustainable housing. Deregulation, he added, is not the way to create new homes.

Although the reforms have been welcomed by developers, others have argued that a zonal system is unlikely to speed up the system. Roger Tustain, MD of planning consultant Nexus, believes local plans, or any other statutory planning document, will need to be produced through a ‘democratically inclusive process’.

Given that the level of detail will have to be significant to ensure socially responsible acceptable development, zonal plans could take much longer to produce and lead to lengthy local examination processes.

Kate Henderson, CEO of the National Housing Federation, said her organisation welcomes any reforms aimed at creating ‘affordable, inclusive, sustainable and beautiful communities’, but was ‘concerned that further deregulation could lead to the exact opposite’.

Zack Simons, planning barrister at Landmark Chambers, said Mr Jenrick’s comments raised more questions than answers, in particular how ‘automatic’ the green light will be to ‘build, build, build’. And who will decide whether a scheme meets the design codes and what will happen if if it doesn’t.

Additionally, whether the green light will apply to scale, height, massing or density parameters, and if so who will determine them and how.

Extension of PDR could result in slums

Mary Parson, chair of the Town and Country Planning Association and a commissioner for the Government’s Building Better, Building Beautiful programme, urged the PM to abandon the proposed extension of PDR.

She fears the extension risks creating the slums of the future, homes not fit to live in that may have an adverse impact on the mental and physical health of those forced to live in them.

Coincidentally, academics at University College London and the University of Liverpool published a report on the same day that Mr Jenrick announced the reforms, warning that schemes developed through PDR tend to create ‘worse quality residential environments’.

When you subscribe to our email newsletter. Plus, receive a 7-day crash course on how to get higher offers on ANY type of property.
Unsubscribe at any time - privacy policy.

House Sales Slow Due To Bottlenecks In Market

Stamp Duty On Second Home – What You Need To Know

House Sales Slow Due To Bottlenecks In Market

Buying And Selling A House At The Same Time

When you subscribe to our email newsletter. Plus, receive a 7-day crash course on how to get higher offers on ANY type of property.
Unsubscribe at any time - privacy policy.

FREE GUIDE: How To Avoid Paying ANY Estate Agent Fees In 2020